The Winning Team! Andrew, Clyde, Howard and Heath of TTGGLOT. All hands on the Gents’ Cup!

After recently discovering that the World’s two most prestigious and elite Golfing Gentlemen’s/Gentleperson’s Associations happened to be located right here in Tasmania, it was decided that there must be a Cup held regularly to determine the best of the best.

As soon as it was announced that the first ever instalment of The Gents’ Cup would be held in Southern Tasmania on the 9th & 10th of September 2017, the golfing World went into total meltdown, and thousands of journos and fans booked their flights from all over the World.

When the date rolled round, the Event well and truly lived up to all expectations. Crowds were massive. Tickets were getting scalped for $10K a pop! The golf was amazing. Sportsmanship was of the highest calibre. Television audiences set new records. The internet broke. Accommodation was booked out and traffic was gridlocked – as all and sundry attempted to catch a glimpse of the World’s Best Golfeurs locked in heated battle.

Well something like that…. but we did actually have a very fine weekend getting to know one another whilst trying to win our matches and the illustrious Gents’ Cup!

Check out all the action below. Reports are provisional – waiting on more pics and words from the victors.

The weather was downright nasty with an antarctic wind, and after rain and sleet the course was a bit soggy for Day One.

With Basil a late starter due to kiddy soccer duties, we swapped the formats around for the day and started with Matchplay.

After some solid general play from Frenchy and Tucky and some yippy putting from Cravo the League were off to a flyer – both reps up +2 after 3 holes.

Frenchy kept his foot down on the throttle with bogey golf pretty much everywhere (meaning Cravo needed pars for halved holes and birdies to win). He closed out his match 4&2 with a tidy bogey on the par 3 7th hole. After that he threw in a highlight by hitting a draw out of bounds. I know right – a draw. Never hit one of those before in his life!

Frenchy was heard to insist that the 13 he scored on the 8th hole was his normal golf – but given that he had 4 bogeys and 2 doubles before that, he really needs to accept the weight of evidence which says otherwise. Playing like a mid 20’s handicapper or better. Own it buddy, own it!

Tucky threw in a few wobbly holes to let Cravo back in – All Square after 7. The icy wind was howling directly into the players faces on the 8th and 9th holes, upping the level of challenge. Great drive on the 8th from Tucky and a dodgy bump ball drive from Cravo. Cravo stepped up his game from there, hitting 2 pure irons in for a GIR and making the par to go 1 up. Bogey would not have cut it. On the short par 4 9th hole Tucky was getting 2 shots on handicap – so definitely a great chance at a halved match. Cravo smashed a driver 6m short of the green and putted on for GIR. Tucky went a bit this way and that but was on for 3. Tucky putted first to the tricky hole position, and had a little curly one for bogey. That just slid by. In for double. Cravo then had 2 putts to halve the hole and win the match. His birdie try slid by and he also had a curly putt back. But he nailed it. Cravo wins 1up.

Interim report : pending the official match reports from the League/Gaz

Heath played solid and Leroy was a bit off his usual laser-like consistency. Heath won this match 3&2.

Gaz and Hammer staged a ripping match, which went down to the wire on a pressure packed last hole. Both All Square on the tee. And that’s how it finished when Gaz’s curly little putt for bogey slid by.

Not quite, Good Doctor! But great match Gaz and Howard – a well deserved draw.

As the name implies – each fella takes it in turn to hit. 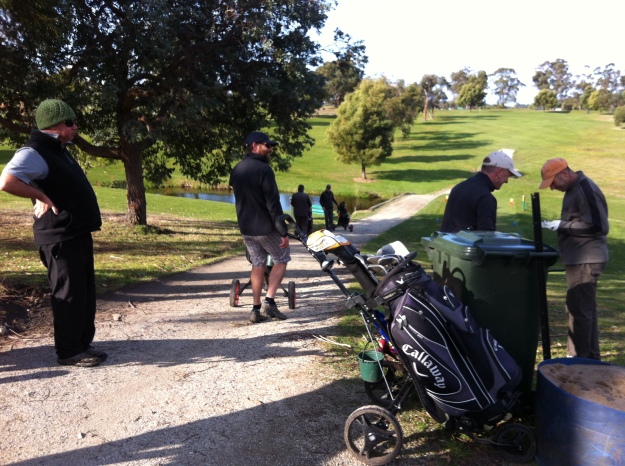 Starting the back nine at NWB

Interim report : pending the official match reports from the League/Gaz

Gaz and Bas couldn’t get into rhythm and were easily towelled up by Hammer and Tucky. 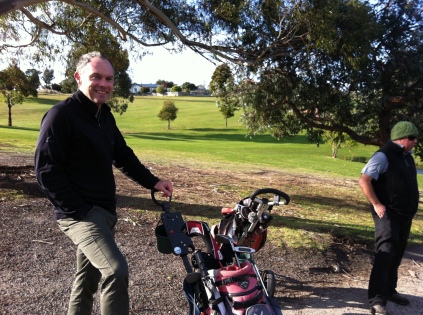 Heath and Frenchy combined for a tidy par on the 10th hole, whilst the Leighs were scratchy for a double. The League went 6 shots up right there!

Not much changed in terms of the score differential for the next couple of holes. Ok golf from everyone with a few highlights from Heath and the Leighs.

The Match eventually changed when Frenchy skewed his tee shot on the par 3 into the hazard and the League racked up an 8. The Tour weren’t awesome either, with a 5, but that 3 shot swing at least gave them a sniff. Now only 2 back.

Heath and Leroy hit outstanding drives on the par 5, which Cravo and Frenchy proceeded to completely stuff up! Andrew actually sent his shot underground (buried it under his clubhead into the soggy fairway). After picking the ball out of its subterranean snug, Heath smoked a fairway wood and Tucky hit a great approach onto the green. League still 2 in front, with 3 to play.

A scintillating drive on the dogleg par 4 16th from Cravo and sideways skew into the bushes from Frenchy happened next. Great play from Leroy and par for the Tour team, sensible play from Heath but a quad bogey for the League (was that another draw you hit there Frenchy for your approach shot?). Big swing on the scoreboard. Tour now 2 shots in front. 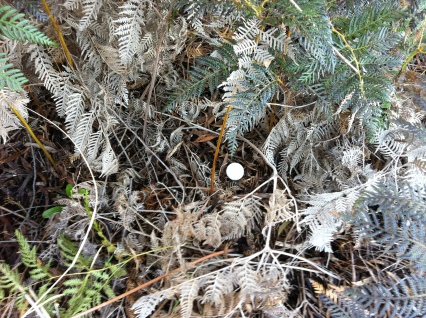 Nasty spot! Unplayable for the League

The 17th saw another scintillating drive from Cravo. Heath had to go for everything and try to drive the green. Unfortunately he was using Frenchy’s “hazard-finder” Callaway, and it worked nicely. And stayed lost, so good riddance. The Tour extended their advantage to 4 shots.

The par 5 18th with its dam offered the potential of a big swing on the scoreboard, but nah – the two Leighs (mainly Leroy) played out a solid par to squash Heath and Frenchy’s hopes. Won by 5 shots.

The Tour couldn’t find a 4th player for Day 2, so sent Basil out alone to battle Heath and Clyde in best ball. Clyde smashed the crap out of the course, recording 23 stableford points alone. Combined with Heath for 25 points in total. Just kinda a bit too awesome.

Poor old Basil shot an admirable 19 points alone, but was never in it and looked a crushed man afterwards.

Frenchy did the same thing he did on Day One – came out and killed it. With a very reliable partner in Howard it was all 2 and 3 pointers for the first 7 holes. The highlight was a great par on the 2nd from Frenchy and tidy bogey for Howard.

Mr Pants kept the Tour in the match, with his scores counting for all of the first 5 holes! A fantabulous effort for a man who only plays golf about once every year. Cravo – pretty terrible.

The Tour were 5 shots down after 5 holes, but something changed from that point. Cravo put on his serious “game” face and started to smoke it. Par par par par to finish.

However, on the 8th tee the League still held a 4 point advantage. Mr Pants’ par was the scorer here as it was worth 4 points (Cravo’s only worth 3). The League struggled a bit for a 1 pointer and suddenly it was game on! 1 Shot in front heading to the 9th.

Frenchy had his customary late form fade-out for the last couple of holes, but Howard stepped up and played the par 5 sweetly, safely on the green for 4. Cravo on for 3. So it would all come down to putting (to the tricky side slope pin). Howard hit a good first putt for the victory, but the 2nd putt just tickled the hole without dropping. Cravo now had a putt to win the match, 2 putts for a tie and 3 putts to lose. Chose the middle option! Halved match – both teams with 19 points.

This was one win one loss. Other than that its a bit of a mystery to me. I think a win for Bas against Howard? Please correct me if I’m wrong. Potentially a 3 putt from Basil somewhere being pivotal in the League’s point?

Both matches were tight and had a mix of quality and funny bad bad.

Cravo parred the 1st and Heath answered back immediately with a high quality iron into 2m on the 170m par 3. Some more pars from both Gents along the way kept the match either All Square or +1 to someone. Cravo and Heath both missed short par putts at the 7th hole to inject a bit of bad putting into the match, but were All Square. Cravo stuck with the theme of bad golf from there and Heath played solid bogey golf to win 2up.

Alex and Clyde were cancelling each other’s good and bad play out to keep things All Square through six holes. Clyde went in the dam. so did Alex. etc etc. Alex hit an amazing A line drive on the 6th hole, but then skewed it into the trees over by Clyde’s 2nd shot. Then they both hit good recoveries and great chips and similar putts to keep it All Square. Alex went 1 down on the 7th after some sandy shenanigans and couldn’t quite grab that back over the last 2 holes. Finished 1 down.

Both matches went to the last hole, but crucially both were wins for the League. Which ensured a bit of a shellacking overall.

A huge congratulations to The Travelling Gentlemen’s Golfing League of Tasmania for showing which Golfing body is best – clearly youse lot!

All at the Tasmanian Gentlepersons’ World Golf Tour (GWT) would like to thank you for coming down to play the first ever Gents’s Cup. We are looking forward to future instalments in what is already a great rivalry. And a few sneaky beers and whiskies along the way. Cheers!

Too good fellas! Emphatic was the word I was looking for.

*assuming that Clyde beat Bas in Match 9 and Bas beat Howard in 10 – otherwise need to amend.